As with many big cities in Asia, Singapore was first ruled by Siam until the Portuguese arrived to use it as a port and then the Dutch but it was the British who settled the city as a trading post for the East India Company. Later to be occupied by Japan during WWII and finally gaining independence in the 1960’s, today, Singapore ranks very high in level of living, strong economy, tax haven, education and as a tourist attraction. Soon after gaining independence, it went through rapid industrialization and growth (joining other “Tiger Nations”: Hong Kong, Korea and Taiwan) to become the powerful nation it is today.
It also emphasizes the importance of being green. Many of its buildings have hanging gardens or vertical gardens, making it a very unique combination of modern skyscrapers and a jungle feel. Definitely plants are happy here! Everywhere you look the perfectly manicured city is one giant garden.
Incredibly clean and modern, it sure is impressive. Can’t wait to see more of this wonderful country. 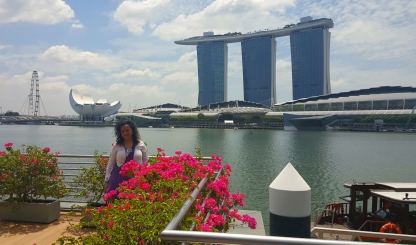 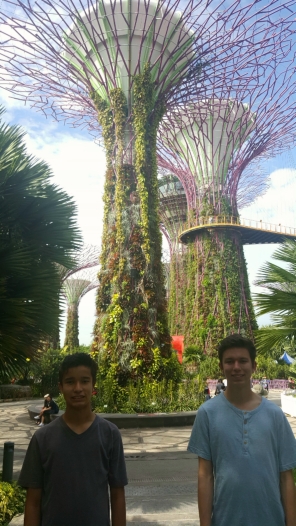 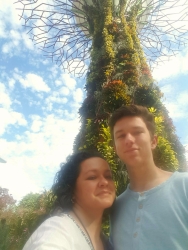 I may have underestimated the nature hike today. The Singapore Botanical Gardens (UNESCO World Heritage Site) and the Mac Ritchie Reservoir are huge! What I thought would be an easy hike ended up being an expert-level-you-will-leave-your-guts-out-here kind of deal.
Holy hikes Batman, about 10 miles in 100°F (35°C) humid heat in crazy rugged terrain and most of it uphill….!
Needless to say, I left both lungs besides my guts up there.
On the bright side, it was the most beautiful, serene, aromatic, deep jungle adventure with a tree top walk that was truly breathtaking. We saw some funky fauna along with the spectacular flora. The monkeys are crazy though… “Cray-zy”!!!
Ferns the size of a van, bamboo as thick as a light post, trees as tall as redwoods with all sorts of smaller plants growing from them, plants with leaves as big as a human, etc.
It took us about 6 hours at a good pace (yes you heard that right…) and we are spent!
Tomorrow will have to be an easy day. 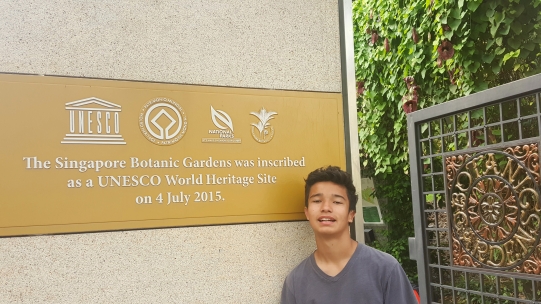 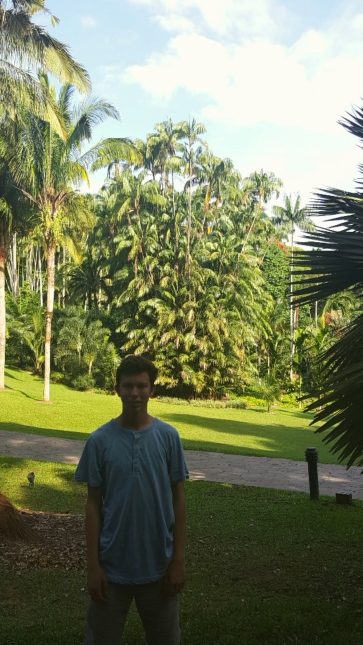 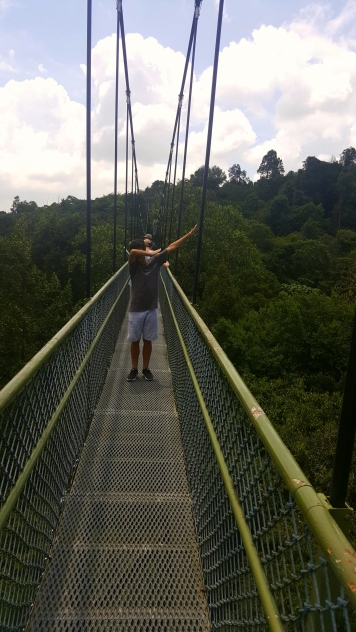 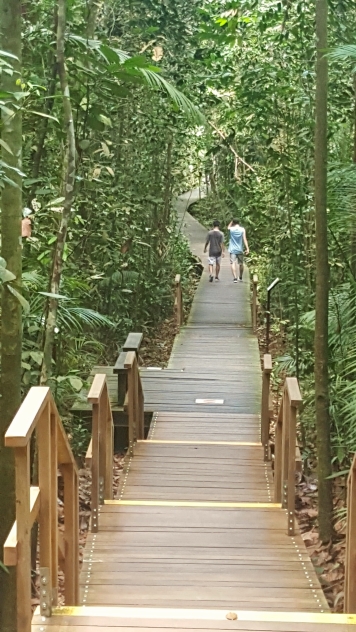 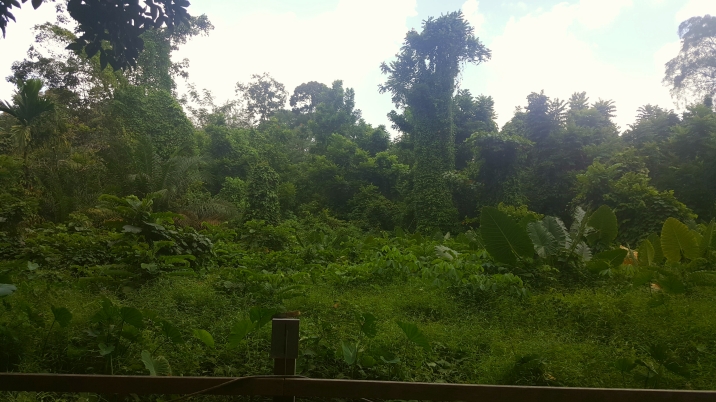 I woke up very confused about the time zone and I thought it was Friday and we are supposed to fly to India on Friday. Needless to say, the boys made me feel like a confused little old lady, which I guess I am…

😒
Anywho… after busting out my hand written itinerary (yes I still do it by hand! I’m a purist, I guess), it showed a visit to the Cloud Forest and Flower Domes at the Gardens By the Bay.
The Cloud Forest Conservatory is really breathtaking! When the doors opened and we were faced by the 42-metre (138 ft) “Cloud Mountain”, Dante started to sing the Jurassic Park theme/song they play when the gates open

😂.
It is a replica of the cool moist conditions found in tropical mountain regions between 1,000 metres (3,300 ft) and 3,000 metres (9,800 ft) above sea level, typically found in South-East Asia, Middle- and South America.
The Flower Dome next door is pretty cool too. It contains thousands of plants from around the world.
Even if you are not too much into plants, this place is truly fantastic! 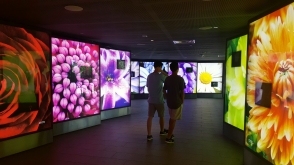 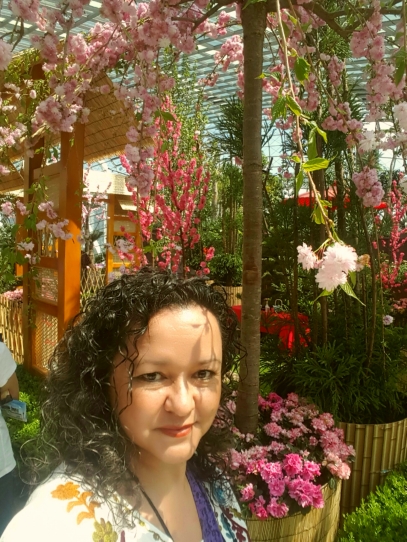 We ended up deciding we had to go see that crazy pool and observation deck at the Marina Sands Hotel. The view is amazing and the pool looks pretty cool too. To the south you see the Singapore Strait filled with giant cargo ships on their way to the South China Sea and beyond and to the north, the big city state of Singapore.
Afterwards we walked all over downtown and hit Clarke Quay and the historic Raffles Hotel where 300 Japanese soldiers committed suicide en masse at the end of WWII when they were told they had to surrender the garrison. Some by leaning into their swords and some by pulling the safety pin of their granades…

🙈
Again, a very hot and humid day so we had to finish the day with 2 cold ones!

Everywhere we go there’s always an interesting Fire Station and because we have our token fireman, they give us private tours.

😉
Over 110 years old, this is the oldest and most important Fire station in Singapore.
The hose tower of the Singapore Central Fire Station, was the city’s highest building during the 1920s.
Fire is fire everywhere! 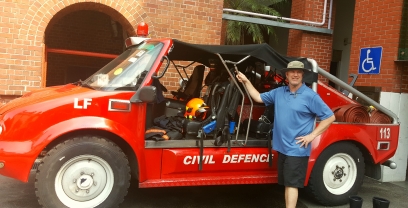 Note to self: Let people that travel with me know that what I consider an easy hike, it is NOT.

The 4 mile Southern Ridges trail takes you up high for a canopy walk and then deep in the jungle and then to uphill curves, then through the Henderson Waves (the highest pedestrian bridge in Singapore built in 2008 using balau all-weather natural wood), and finally a descent through steps and downhill trails.
Today it was ‘only’ 96°F (32°C) and the humidity gave us Mufasa hair again (I had to do my asian style or what my kids call the Reverse Mickey Mouse do because my ‘fro is out of control!).
If you want to experience nature in all its glory, Singapore is for you! It is one gigantic garden with an extremely rich flora. 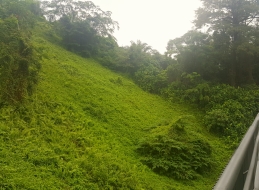 I can not tell you enough how amazed, impressed, astonished, blown away and perplexed I am with the impeccable state of every single metro car in every single line we used. I mean, these floors are SPOTLESS! And believe me, tons of people use the metro every single day!
Having ridden the metro systems of about most big cities around the world, none comes even close to Singapore’s OCD.
Bravo S’pore and it’s citizens!

Changi Airport has been rated the Best Airport in the world for 5 years in a row. And it sure is well earned! With tons of amenities and attractions (including a free movie theatre, free foot massage, gyms, showers, video games booths galore, restaurants, food courts, shopping, spa, a koi pond, butterfly garden and so much more), you can check in many hours prior to your flight and not be bored.
We went to see the sunflower garden, an open air rooftop collection overseeing the runways. And because Singapore can’t show off enough, even an imptessive orchid collection sends you off to your next destination.
Beautiful, clean, friendly country, Singapore may be one of my favorite launching pads to Southeast Asia. 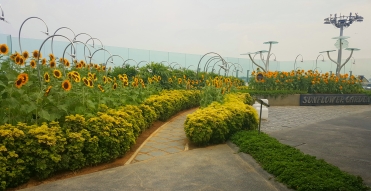