The boys were excited to see New Dubai, after all, that’s the image we westerners know. And it does not disappoint! 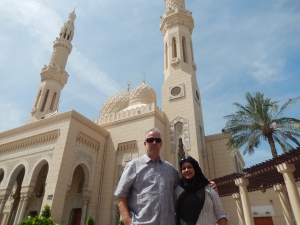 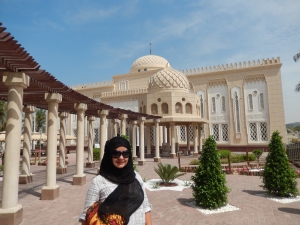 Jumeirah Beach with the only 7 star hotel in the world, the Burj Al Arab as our backdrop. Only guests are allowed inside or if you have a restaurant reservation for one of their restaurants where you will spend around $300 per person eating little…. Or you can have tea for $150 per person.
Vincent said he had an idea: he suggested that we don’t travel for the next 3 years and we save all that money and come back and spend one day as guests because that is all we will be able to afford. LMMAO! 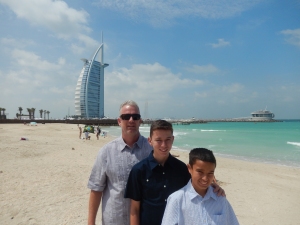 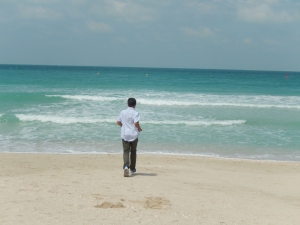 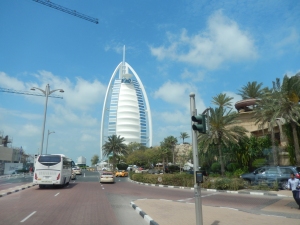 Next door to the Burj Al Arab is the less expensive but still out of reach for 99% of the world, Madinat Jumeirah Hotel. But here you are welcome to walk through their souk. Absolutely gorgeous! 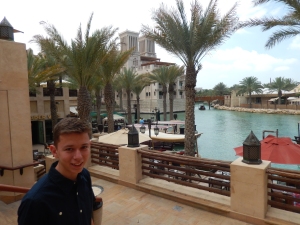 The Mall of the Emirates is the biggest mall in the world. Yes, it is massive! It even has its own ski slope inside. Snowboarder Wayne had to give it a go.
We watched for a little bit and then the boys and I went upstairs to the most gigantic, most modern, most state of the art arcade. Even the boys said it made Japan look like it needed an upgrade…. This thing is unbelievable.
It was here at this mall that we started to get really impressed but the best was yet to come…
‪#‎SkiingInsideAMallinTheMiddleOfTheDesert‬ ‪#‎SkiDubai‬ 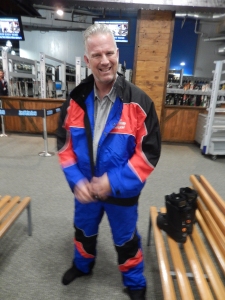 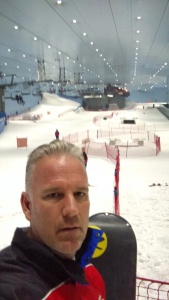 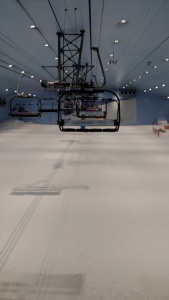 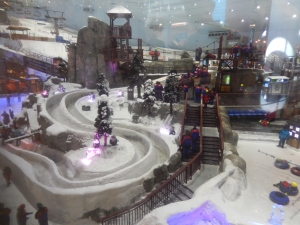 As we approached Downtown Dubai and the true skyscraper of the world, the Burj Khalifa, we realize that there are dozens of buildings around it that are about as high as the Empire State or more and they look dwarfed by the ‘no way! height’ of the BK.
The Dubai Mall lays beneath it. OK people, this mall made our jaws drop from the moment we set foot in it. This one too, is massive but every store is high end brands. And I’m talking about stores with bodyguards and doormen. The people walking around looked like they are worth a lot of money…. This is where you go….what?????
For starters there is a ‘fish tank’ the size of Shamu’s tank in SD. The amount of marine life in that thing was staggering. There was even a dude diving in there!
Then we see this ‘waterfall’ with a magnificent design. Oh but one was not enough so they have TWO!
An Olympic size ice rink, a giant theatre, hundreds of expensive restaurants and hundreds of stores.
The one I posted specifically, was a chocolate shop. It had Swarovski Crystals hanging everywhere like they didn’t know what to do with them…
No, we have NEVER seen a place like this. Vegas? Nope. London? Nope. Paris? Nope. NY? Nope. Milan? Nope. Beverly Hills? Nope, nope, nope. Nothing comes even close.
People dropping some serious cash here!…
‪#‎iBoughtNothing‬… 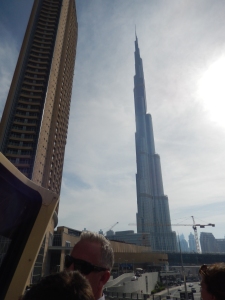 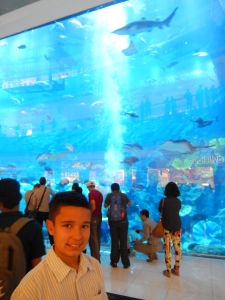 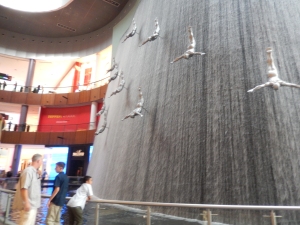 The 200+ stories high Burj Khalifa is the tallest skyscraper in the world. I will not bore you with the crazy numbers it boasts. Google it and you will see. The building itself is gorgeous. A dark golden hue that makes it look like it is in HD. It is unreal.
I reserved the sunset time slot since 3 months ago and it sold out weeks ago…
You go up in the fastest elevator in the world to the 125th floor. (listen, excuse the language, but the UAE doesn’t go half assing things. They go for record breaking feats.)
You step out of the elevator from the future and you are literally On Top Of The World.
But wait! You step outside to the open air view deck and you look up and there are still 75 stories above you!!!
You can see for miles and miles. And the buildings you see below are higher than the Empire State. Magnificent piece of art, architecture, engineering, design, imagination and heart.
Wow! And more wow!
We saw the sunset and came down thinking that the first phrase of the lobby plaque rings true.
“I am the power that lifts the world’s head proudly skywards, surpassing limits and expectations” – Burj Khalifa 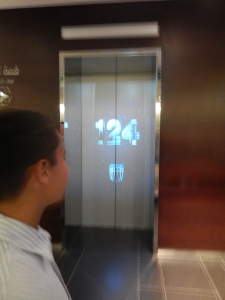 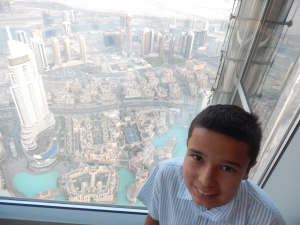 The building sparkles at night and it is gorgeous!

But after a long long day we ended up at a juice bar by our apartment. This place is crazy (what isn’t in this country?) They have a room full of fruit hanging from everywhere. It smells heavenly in there!!!! And the juices are maaaaaarvelous!
We walked more than ever before. If you think that you walk a lot in Europe, be prepared to do three times as much here. Dubai is so unbelievable big that you walk and walk and walk, even when you are dropped off at the sites. You have been warned.
Off to bed!
‪#‎VincentsTrollFaceinThatLastPicMadeUsLaugh 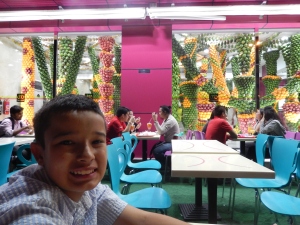 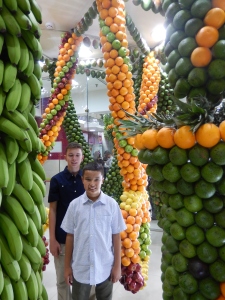 The Palm Jumeirah is man made. It is lined with apartments and houses and at the top is the Atlantis Resort.
They really like their aquariums here.
The boys want to move into one of those houses…
‪#‎ThisPlaceisCool‬ 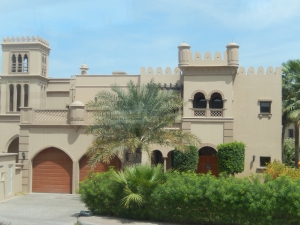 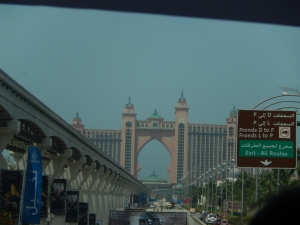 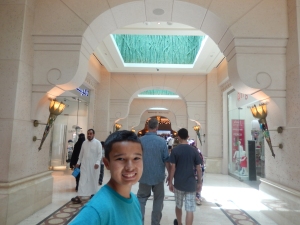 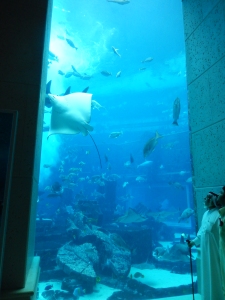 The Dubai Marina is a whole other area where they have over 160, yes you read right… over 160 skyscrapers that are between 60 to 80 stories high and many more are being built right now. They call it the Tallest Block in the World.
Again, this area is lavish, swanky, shiny and new.
Tons of high end restaurants and shops line the beach.
Most expats choose to live here.
#$$$$$ 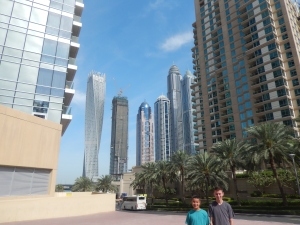 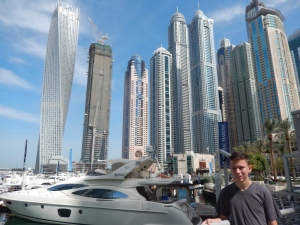 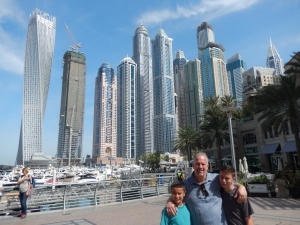 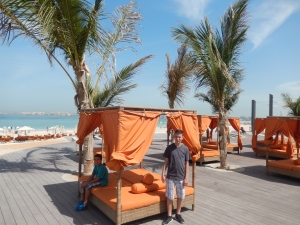 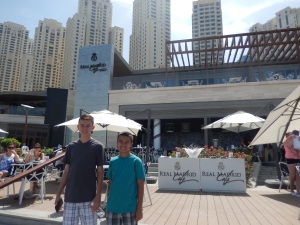 *Next post: we head to the desert and more. Stay tuned.